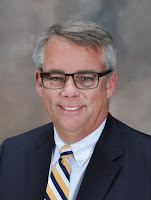 Bank of Luxemburg and Luxemburg Bancshares, Inc. have banking offices in Luxemburg, Green Bay, Dyckesville, Casco, Algoma, Kewaunee and Sturgeon Bay. The company also offers investment services, financial planning and the sale of alternative investments to its customers in each community.
Posted by Bank of Luxemburg at 9:40 AM 88 comments

Darren Voigt, previously Senior VP of Commercial Lending at Bank of Luxemburg, has been promoted to Chief Lending Officer.

Voigt began his successful career at another financial institution as a mortgage and commercial lender before transitioning into various management roles. With over 25 years in the industry, Voigt has gained experience in consumer and mortgage lending, as well as business and commercial banking and treasury management.

Voigt started at Bank of Luxemburg in January 2014. “I appreciate the opportunity to work for an institution that truly puts the customer first,” said Voigt. “Here at Bank of Luxemburg, employees are empowered to make a positive impact.” As Chief Lending Officer Voigt looks forward to working with clients and helping them achieve their financial goals. “As a community bank, we are dedicated to providing the service our customers need,” said Voigt.

During his spare time, Voigt enjoys playing golf and traveling.
Posted by Bank of Luxemburg at 8:27 AM 31 comments

The shareholders also elected Michael R. Baudhuin and David S. Rueckl to the Board of Directors of Luxemburg Bancshares Inc. Mr. Baudhuin is the Executive Vice President and Co-owner of Wire Tech Fabricators, Inc. in Sturgeon Bay, WI and Mr. Rueckl is the owner of Rueckl Oil, a northeast Wisconsin distributor located in Casco, WI.

President John Slatky noted, “Continued dividends are one example of the solid financial position of Luxemburg Bancshares, Inc. and Bank of Luxemburg.” The Company has a 33-year history of paying and increasing dividends on an annual basis. The Bank is expecting to maintain profitable operations through 2016 and beyond with substantial deposit and loan growth.

Luxemburg Bancshares, Inc. and Bank of Luxemburg have banking offices in Luxemburg, Green Bay, Kewaunee, Dyckesville, Casco, Algoma and Sturgeon Bay.  The company also operates Raymond James Financial Services, offering financial planning and the sale of alternative investments to its customers in each community.  For more information about Luxemburg Bancshares, Inc. contact John Slatky at 1-920-845-2345.
Posted by Bank of Luxemburg at 10:13 AM 32 comments

Loan Program Aimed to Benefit all of Kewaunee County

Bank of Luxemburg has increased the dollar amount and eligible footprint for their Revitalization Program. The program, which initially allocated $1 million to businesses within Luxemburg, will now allocate $3 million to the fund and it will be available to businesses throughout all of Kewaunee County.

The Revitalization Program assists business owners to enhance the physical appearance and economic vitality of their businesses and commercial buildings within all of Kewaunee County. Long-term objectives of the program include physical improvements of buildings, landscaping and parking lots, plus increased pedestrian functionality.

“Like Luxemburg, Algoma has its main street program, and Kewaunee is looking toward additional development with its harbor renovation,” said Executive Vice President Tim Treml. “From the Town of Carlton to the Town of Red River, there are small businesses that could benefit from this program.”

Kewaunee County business owners interested in the Revitalization Program can contact Mike Stone at Bank of Luxemburg at 920-845-2345 or mikestone@bankoflux.com.